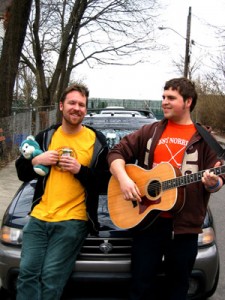 In the week leading up to our CD release, Make An Animal Noise, Grubstake has had some fun!

This past Sunday, we played a live set and had an interview with Jake Rabid and John Viteese from Y-Rock.  I’m working on getting an MP3 of the show up soon.  Grubstake also played live on Sunjay’s Brekky Shift Monday afternoon radio show on WKDU.

I put the lay out for the CD to bed around 4am this morning.  It is a pure pleasure, working for myself and setting my own schedule.

Pat also alerted me to a write-up for our CD Release show this Saturday in Philadelphia:

Sat., Aug. 2, 10pm. Free. With Dr. Tommy Thunder. Fergie’s, 1214 Sansom St. 215.928.8118. www.fergies.com Named for an arcane mining term, Grubstake have been hammering out mud-caked guitar-drum blues for about a decade now. Patrick McHugh led the band in Boston for much of that time before returning to his old stomping grounds in Philly and nabbing drummer/engineer Steve Bozzone to make a fifth album, Make an Animal Noise. It’s another gritty, ground-down outing, with McHugh hollering about TV dinners and other mundane miseries on “Delaware” and trafficking heavily in spite on “Sophisticated Whore.” Most garage-rock duos putter out when they cease to mix things up musically, but McHugh’s been around long enough to know when to throw a wrench into the works. (Doug Wallen) – Philadelphia Weekly

Grubstake has been a great experience, it’s been a good time working with Pat McHugh, playing random shows in Pittsburgh, Boston, Providence, NYC and Philly on weekends and putting together a CD.  Come catch my last show with the grubbers this Saturday at Fergies!