A video study with proposed solutions to repair one of the worst intersections in Portland, Oregon.

See a cyclist in need of help? If you’re prepared and can spare the time, consider stopping to help by loaning tools, patches, or expertise. As more cyclists take to the streets, we need to create a network of support to make everyone’s ride more comfortable. 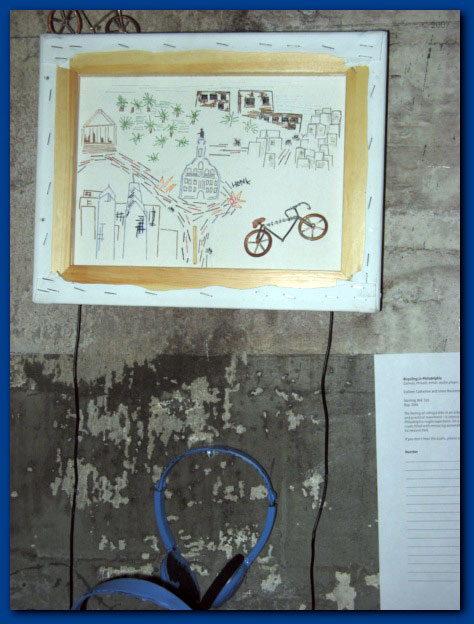 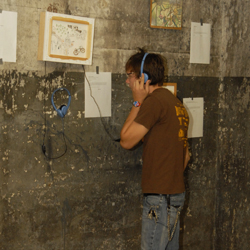 Colleen and I created this piece for the 2007 5th Annual Bike Part Art Show, a benefit for the Neighborhood Bike Works in Philadelphia.  I put together a 40 minute found sound audio collage for the audio aspect, and Colleen fashioned metal mini bikes and sewn backwards-canvas Philly landscape.  The audio was placed on a tape, inside of a walkman tape machine with two pairs of headphones coming out.  The back of this canvas, built by Colleen, was really inventive and hopefully I’ll get some photos of it soon.  It contained the recorder in the back and accommodated the headphone cables.

The piece was one of the only interactive pieces in the show and folks really dug it!  It’s now being featured in an upcoming bike-themed show at Moore College:

Bicycle: people + ideas in motion celebrates Philadelphia’s passion and commitment to the bicycle with exhibitions and events that explore the art and design of the bicycle—from functional object to a canvas for good causes, personal expression and civic mindedness.

Kate Duncan, our –historical and contemporary art advocate, creative fundraiser & event planner, curator, artist, explorer & guider- friend is behind a lot of this.  She’s convinced us to create another collaboration for this year’s show, too.  Now that we’re based in Portland, it should be an interesting lens to create through.

If you make things, you should consider submitting a piece for the upcoming 7th Annual Bike Part Art Show!  The Neighborhood Bike Works is easily one of the best grassroots lets-get-tons-of-people-on-bikes organizations in the country.  If you’re in Philadelphia, the show is one hell of a bike fun party.